Thinking about going to Marrakech soon? Well, I honestly got to tell you that it’s a Great Idea. Although many would think about going to the desert, but the city itself has many places to visit. Some would recommend to walk but after sort of getting lost the day before, my friends & I decided to rent a chauffeured-van. Our riad manager booked the van for us, and it costs EUR 30 for the 5 of us. We got picked up at 9am, and off we go. 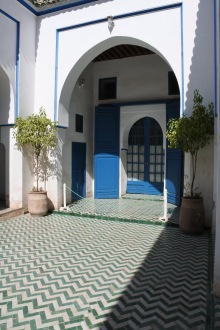 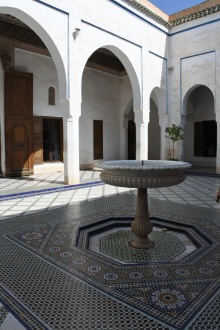 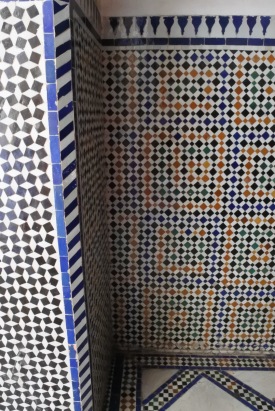 Our driver took us to Avenue Imam El Ghazali, actually still near from Jemma El Fna. The entrance that he dropped us off at, was not expected as a palace entrance. The gate was all white and only slightly opened. Although many people are entering it. We walked along the pathway, with orange blossoms on our sides. And then we found our way to another entrance that leads us to the inside of the palace. This palace was built in the 19th century and has been considered a masterpiece of its time. It boasts Moroccan – Islamic architecture, which was worked on by expert craftsmen from Fez. It covers an area of 8 hectares & includes a set of gardens. According to history, Bahia Palace was the residents of the Sultan Hassan I of Morocco’s chamberlain which then passed down to his son. During the French era, the palace is converted to the Marshal of France’s residence. Now, it is open for public and can be used for many events. But it is also said that the Moroccan Royal Family frequents staying there during their holiday.

In less than 10 minutes van ride, we arrived in our next destination. Just at Rue de la Kasbah, on the south side of the Kasbah Mosque, we found ourselves entering a small entrance that reveals a large area of sepulchers.  It is called Saadian Tombs, and is the only remains of the Saadian dynasty. It is a burial site for the members of the dynasty and is divided by gardens between them. One of the most prestigious ones is The Hall Of The Twelve Columns. The tombs are intricately decorated, and some also carry a poetic epitaph. 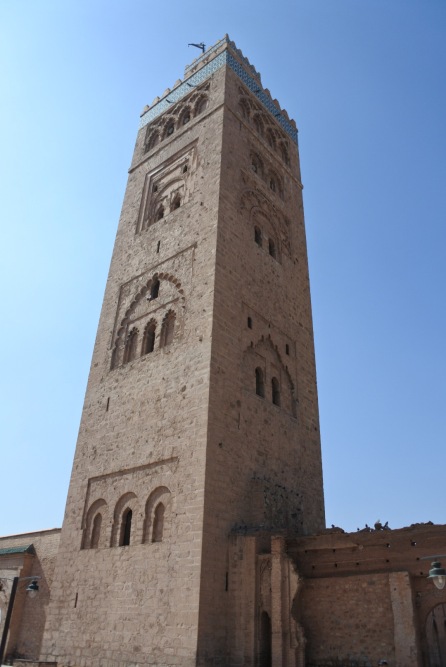 Koutubia Mosque is the largest mosque in Marrakech, located just in front of Jemma El Fna. It stands out because it is made out of red stone, as well as its 77m minaret. The mosque is also known as the Mosque of the Booksellers, to reflects the bookselling trade in nearby souks. One would notice that the roads in Marrakech is somehow leads to this mosque. The mosque only allowed moslems to enter & you need to wear appropriate attire. When we got to the mosque, it was around midday. Most people are just finishing their prayers and some gathered in the front yard. Just a walk to the other side of the mosque, there is a garden with blooming flowers. 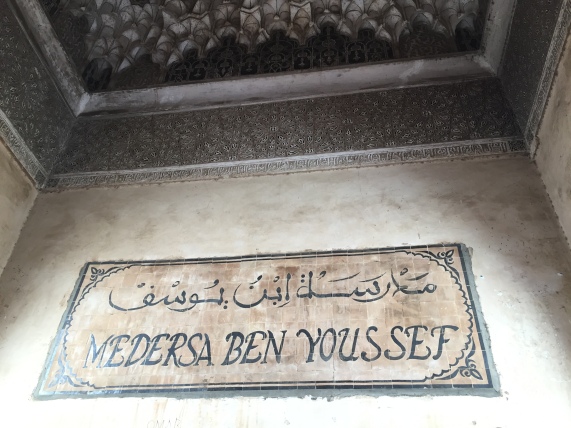 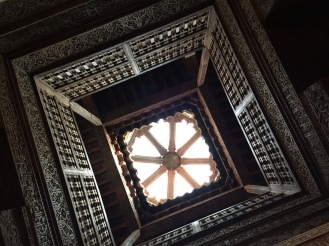 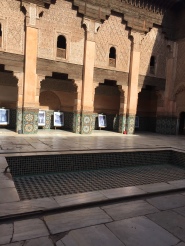 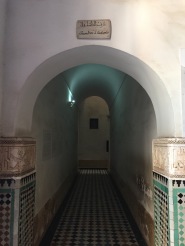 Madrasa Ben Youssef is a theological college that is devoted in teaching the Quran. It is also the biggest madrasa (school) in all of Morocco. Although it is no longer in operation, the school in open for public. It can be reach by foot on Rue Assouel. The madrasa is well preserved, and the architecture is considered to be in the same style as Alhambra in Spain. It is also said that the school housed unto 900 students in one time. Although it looks small from the front, once we entered the school, it is like being transported to another location. The center of the school has a courtyard with an ablution pool. The buildings surrounding it are covered in decorations out of cedar wood carvings and multicolored tiles. Part of the building is used as a dormitories. We also went to the second floor, which the rooms has a great view to the courtyard.