Arriving in Marrakech, we took time to grasp what it offers us. The city itself is quite organized & clean, wide roads, signage in Arabic as well in French, and as expected palm trees. In a short time, we got from the train station to our Riad located in the Medina. It is a definite must to stay in the old town, as most of the must sees & dos are just a walking distance away.

On our first night there, since we have been on the road (and air) for so many hours, we decided to take things slow. Our riad guy recommended us to take a stroll at the Jemma El Fna & grab a bite there too. It is a 10 minutes walk, somewhat like being in maze, but us 5 made it without a glitch. Apart from its very short distance from the riad, Jemma El Fna is like a world of its own. The market comes alive in the evening. The square has rows and rows of food stalls, mint tea seller, and juice booths as far as the eye can see. It is slightly overwhelming, but we managed. Don’t get me wrong though, there are also restaurants & cafes that surround the square as well. But we’ll get to those ones a bit later. 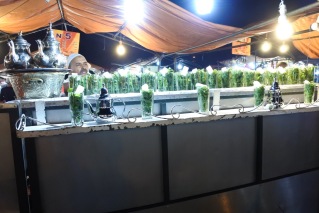 The food offered by the vendors are mostly similar. A selection of to-be-grilled beef/lamb/chicken, tagine, fried chicken & fries, and veggies. Although everything pretty much look the same, we used the 1 principle we believed in when it comes to street food; “Go with the crowd”. And, so we did. 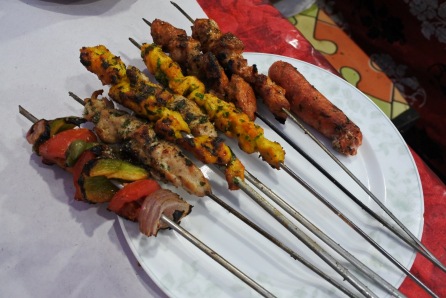 The stall that we chose is quite crowded. One of the waiter guided as to the food table & we chose immediately what we wanted. Some kebabs, fried chicken, tagine, and fries were picked & we waited at our table. They served us with some breads, olives, pickled veggies. And they would be more than happy to refill them. But be cautious, because some of them will charged you at the end. Just after a 5 minutes, our food started to come. Although they don’t look anything fancy, but it was superb. The ingredients are fresh, perfectly seasoned, the meats are juicy, and the portions was good. We ate our food slowly whilst enjoying the hustle & bustle of the square. After finishing our meal, one of the grill guy asked whether we want to take his picture or not. Well heck, why not. Although it meant to give him a tip before we left. But all is well. 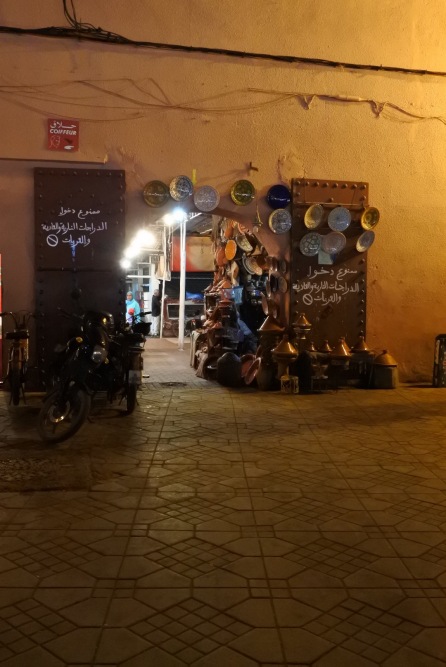 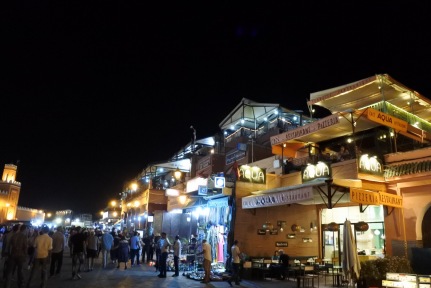 After that huge meal, we decided to walk around the square for a bit. It was packed, with locals & tourists. There are a few performers on several corners of the squares, playing music, dancing, and with cobras as well. It is safe to watch but always prepare some small changes to give to them. But that’s not all! Many shops are still open until late at night, and don’t forget to bargain when you want to buy any souvenirs. As the night goes on, we started to feel a bit tired and need a quick boost of energy. We stopped by at Cafe De France, and went straight to the upper level. We sat on the terrace area which weren’t crowded at that time. Ordered some mint teas and lattes and just chit chatting away. Accompanied with the cold desert breeze, we found ourselves relaxed and in awe with the view. Jemma El Fna is spectacular. Back to our drinks, again, like most of the things we tried out, they’re great. Once finished, we traced our way back to the Riad and take our rest to prepare for our adventure the next day.