As a city girl whose daily life consists of hours of commuting and countless rendezvous at a luxurious mall, I get a little too excited when I get in touch with nature. And that is exactly what happened during my 2-week stay in Prague.

One of the hotel I stayed in was Standard Hotel, a place that lived up to its name. The hotel was located on the Vltava riverside, just across a couple of floating bars (yes, these were ships turned into bars), near a very convenient tram stop (Vyton).

While the hotel itself was quite modest (good service and excellent breakfast), the neighborhood was really spectacular. From our attic window we could see the Prague Castle and a beautiful metal train bridge (which was quite exhilirating to be on when the train was passing).

But, what impressed me the most was the fact that Vyton was the place where the swans hung out! Considering the river was very long and the swans could spread out anywhere, I thought I was very lucky.

So every morning for a few days, during breakfast I kept some bread in my pocket (it’s not very noble I know) and visited the swans. The swans knew very well when humans were approaching it meant food was coming. So as I was spreading out bread crumbs, they would gather at my feet and peck away. Their long neck, black and red beak, flawless white feather were so elegant that it was hard to believe they lived out there in the wild. 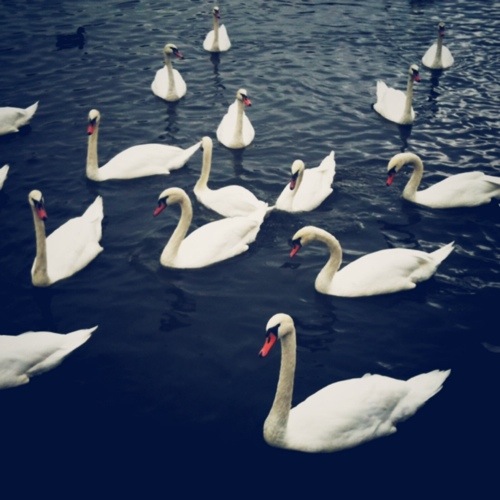 During sunset, the river view was surreal. Some of the swans were already getting ready to sleep on various spots. Others thought one last snack before bed wouldn’t hurt. Good night!